Rescuing Dogs Is G-d’s Work, Too! 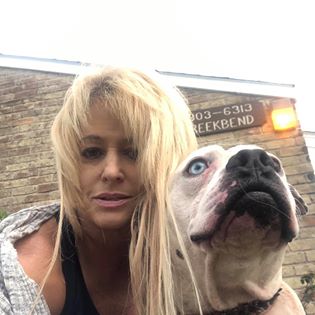 Rescuing dogs is the least-glamorous job in the whole world, but it’s G-d’s work.

Over the last several years, Alaina Rosenblatt has strode purposefully into city shelters to pull dogs off death row. She’s advocated for and rescued dogs from horrific situations in neighborhoods around Houston.

Rosenblatt and her 17-year-old daughter Brooke also catch puppies abandoned on busy roadways. They bring food, clothing and sometimes Rockets tickets to children they meet in the parts of town where packs of dogs tend to roam freely.

They never look away.

No matter how derelict the dog, the first stop on any ‘freedom ride’ in Rosenblatt’s car is drive-thru lane at Starbucks for a puppy latte.

It’s a fairytale ending for the lucky dogs (and the occasional cat) Rosenblatt rescues. Off the street, bathed, vetted and comfortably ensconsed on cushy beds in Rosenblatt’s townhome, the animals are either adopted locally or eventually passed along to rescue groups that specialize in transporting dogs to faraway states up north…where there aren’t millions of unwanted, unloved animals on city streets.

Rosenblatt believes that dogs are sent from above for a reason. They enter an owner’s life for a purpose that may not be readily discernible — and when their work is through they inevitably cross the rainbow bridge.

L’Chaim Center is a longtime supporter of her non-profit, appropriately dubbed Fairytale Endings.

Please help us to support her cause with financial contributions or even bags of dog food.

Who knows, maybe there’s a dog waiting to come into your own life, you just don’t know it!

Welcome to the L’Chaim Center